From Decrypting the NKRYPT sculpture
Jump to: navigation, search 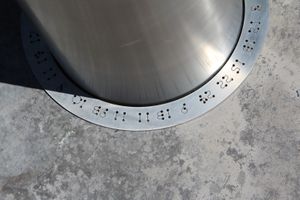 Glenn surmises that: The numbers at the base of the poles are repeat counts from STR loci of DNA. There is a pair for each locus. The number 93 represents '9.3', which is the third microvariant of a 9 count allele. Transcribing them with some punctuation (and a guess at which loci they represent) yields:

The loci suggest that the numbers represent the results of a genetic test conducted on a group of 8 related humans.